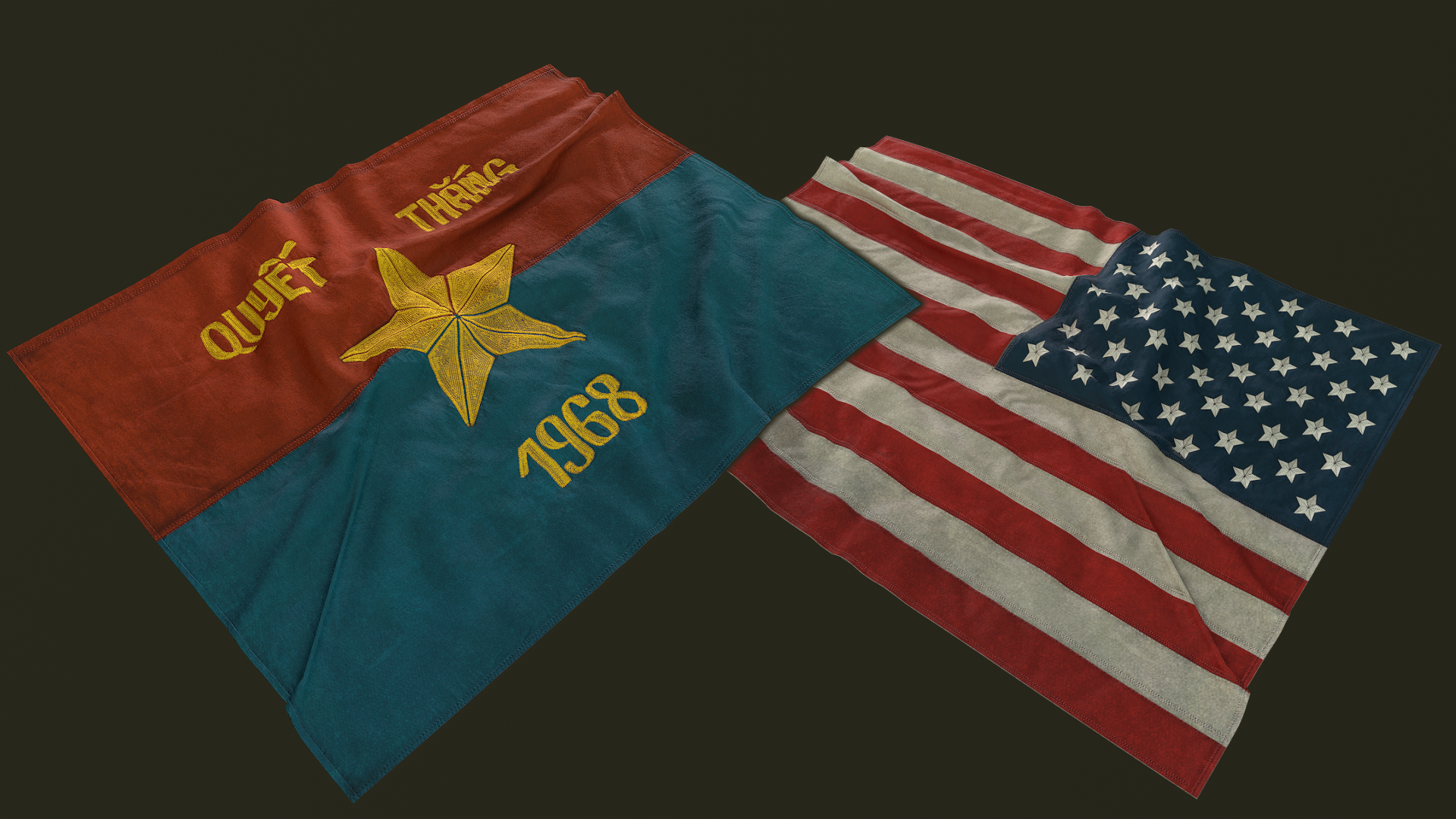 1.0 What is Military Conflict: Vietnam

MCV is a First Person Shooter set in the Vietnam war developed by Dustfade and is using CSGO's Source Engine. It is inspired by more classical multiplayer games such as Day of Defeat, Vietcong and Insurgency. The maps are developed in Hammer++ (The newest version of Hammer).

The game is available on Steam - Military Conflict: Vietnam

1. Create a historic location, battlefield or event from the Vietnam War (There is no need for 100% accuracy, take an example of our maps).
2. The map should support at least one of the main game modes - Conquest or Capture The Flag.
3. Follow the official existing maps as a guideline for your maps (metrics/dimensions, visual style and size of the playable space).
4. Maps that were under creation prior to the announcement of this Contest can be entered, as long as a complete map version (layout and any non-greybox art) was not released for public download.
5. Do not use any other content than those provided by Military Conflict: Vietnam or your own creations.
6. Unfinished maps will not receive a prize, but will still be taken into consideration and can be included in the game in a later stage (after you, or with an agreement, the development team finishes it).
7. The judges decide on the top 10 maps which will be hosted on our specially dedicated server. After that the nominated maps get another month to be polished and tested before the final judgement.
8. The first submission is on the 5th of April 2023, 00:00 Central European Time. (read about the submission details further on)
9. When participating as a team the price will automatically be divided and agreed on by the amount of persons, unless the percentage is stated differently and is agreed on before submitting.
10. The submission date and deadline will be extended by a month when there are not enough submissions on the submission deadline (minimum 10 maps in a playable state).
10. The deadline is on the 15th of May 2023, 00:00 Central European Time.
11. Do NOT update your workshop submission during the judgement process (after the initial submission and after the deadline), until the top 10 nominated maps and the contest results are announced or your map will be disqualified!
12. The maps will be rated by the judges on the following criteria: Gameplay, Visuals, Originality & Polishing (Read more about the judgement procedure further on).
13. Judges and official developers are not allowed to participate in the mapping contest.

The prize pool will be handed out by Dustfade.

Any map in a finished state, right after the contest or in the future, has a chance to be purchased by Dustfade to become officially part of Military Conflict: Vietnam. You will receive a payment and be forever included in the main menu credits as an official map maker!

- Upload your map to the workshop and name it as following: [Contest 2023] <mapname> [Gamemode] (Conquest or CTF).
- Your map will be added to a Workshop collection to see all other participants and submissions. Make sure to add your team members as contributors to the workshop page.
- All custom textures, models, etc. must be embedded into the map's .bsp file. Assets must also comply with Steam Workshop guidelines.
- Make sure the map is in a playable state and has a functional game mode.

1. The maps can be submitted until 5 April 2023, 00:00 Central European Time. When there are not enough submissions of playable maps (minimum 10), the submission and deadline will be moved by one month.
2. On 15 April 2023 (latest) the judges will nominate the top 10 maps. Do NOT update your workshop submission until the judgement announced the top 10 nominated maps or you will be disqualified!!!
3. The top 10 nominated maps will be hosted for 1 month on our specially dedicated server so they can be played and tested. The mappers can use this 1 month to update and polish their maps.
Hint: create a separate workshop to test changes locally and update the workshop with your submission only to see the changes on the server and have it submitted to the contest.
4. On 10 May 2023, 00:00 Central European Time, is the final deadline, so make sure to submit your map in time (to be sure upload your map in time on the workshop and if needed update it). The judges will take 1-2 weeks to judge all the maps and nominate the winners! Do NOT update your workshop submission until the judgement announced the results or you will be disqualified!

The judges will use a 100 point score system:

Each judge will rate each map on the different criteria's and give a average score. The average score of each map rated by every judge will be the final score of the map and determine the ranked place in the contest.

In order to purchase your map, you have to sign a form transferring ownership of the map and its source files to us. This will allow us to officially include your map in the game and, if necessary, to make changes to it. You will be forever included in the main menu credits of the game as an official mapmaker!

Thank you for everyone that has decided to take part in this competition, good luck and have fun!

We will include all the necessary files to help you get started, so that you can get an idea of our preferred dimensions and consistency (art direction, metrics and dimensions). You are allowed to copy and paste stuff out of our maps and use them in your own map.
Included in the folder (Military Conflict - Vietnam/sdk/mapsrc/) you will find:

Rules, information, deadlines, and prices could change during the contest depending on need for clarification, better guidelines and participation. Participants will be notified about these changes on the Mapping Contest channel on the MCV Discord server.

The EULA of the game applies to this mapping contest.